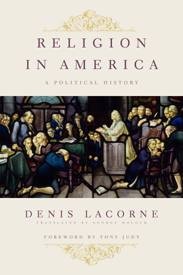 Religion in America: A Political History, by Denis Lacorne (CERI)

Denis Lacorne identifies two competing narratives defining the American identity. The first narrative, derived from the philosophy of the Enlightenment, is essentially secular. Associated with the Founding Fathers and reflected in the Declaration of Independence, the Constitution, and the Federalist Papers, this line of reasoning is predicated on separating religion from politics to preserve political freedom from an overpowering church. Prominent thinkers such as Voltaire, Thomas Paine, and Jean-Nicolas Démeunier, who viewed the American project as a radical attempt to create a new regime free from religion and the weight of ancient history, embraced this American effort to establish a genuine “wall of separation” between church and state. Read the full presentation on Columbia University Press website

This book was reviewed by Clive Crook, Financial Times, on August 1st. Read the review

Denis Lacorne joined CERI in 1982 after spending 12 years in the United States and 2 years in Canada. Has been a visiting professor at the University of California Irvine, the School of Advanced International Studies in Washington, DC, New York University, the Institut Universitaire des Hautes Etudes in Geneva, and a visiting fellow at Stanford University, the University of California Berkeley, the Remarque Institute at New York University, and the Institute for Religion, Culture and Public Life at Columbia University.
He specialises in the political history of the United States.  See his publications.